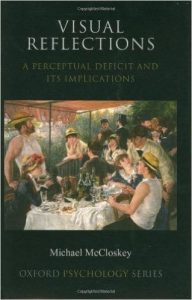 How much can we learn about normal visual perception and cognition from a malfunctioning visual system? Quite a lot, as Michael McCloskey makes abundantly clear in this book. McCloskey presents his work with AH, a college student who has an extraordinary deficit in visual perception. When AH looks at an object, she sees it clearly and identifies it readily; yet she is often dramatically mistaken about where the object is or how it is oriented. For example, she may reach out to grasp an object that she sees on her left, but miss it completely because it is actually on her right; or she may see an arrow pointing up when it is really pointing down. AH’s errors, together with many other clues, lead McCloskey to some very interesting conclusions about how we perceive the world. He develops theoretical claims about visual subsystems, the nature of visual location and orientation representations, attention and spatial representations, the role of the visual system in mental imagery, and the levels of the visual system implicated in awareness. Visual Reflections makes a fascinating and compelling case that we can often learn more about a process when it goes awry than when it functions flawlessly.