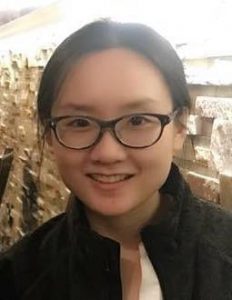 We congratulate Pang Chaisilprungraung on successfully passing her doctoral defense.

Pang is headed next to a postdoc research fellowship at the Walter Reed Army Institute of Research. Brava, Pang!

Abstract: Successful recognition and interaction with objects require the ability to perceive and represent how object parts are internally related (e.g., a teapot’s handle is attached to its body, at a location opposite to the spout).  According to many theorists, axes defined on the basis of object geometry provide a coordinate system for representing the locations and orientations of object parts.  Understanding the function and the nature of object axes can produce key insights into theories of shape representation.  This thesis examines two poorly understood problems: 1) what precisely is the mechanism by which coordinate axes accommodate shape representation and 2) what aspects of object geometry determine how axes are assigned to shapes?  I address these problems in light of previous research on object orientation representation. The coordinate orientation representation (COR) theory (e.g., McCloskey, 2009) posits that the brain represents the orientation of a whole object (e.g., orientation of a pen on a floor) by encoding relations between sets of coordinate axes separately defined for the object (the pen) and for an extrinsic reference frame (the floor). The first portion of this thesis demonstrates that the COR mechanism can be adapted to explain how relationships of parts within an object are represented.  The second portion uses a novel paradigm motivated by the COR theory (Chaisilprungraung et al., 2019) to investigate whether the origin of coordinate axes (i.e., the point where the axes intersect) corresponds to an individual elongated part (e.g., the handle of a hatchet) or the overall object’s center (e.g., the hatchet’s center of mass).  The latter portion’s result deepens the understanding about the mechanism for representing shapes under the adapted COR theory.  These novel findings are important not only for psychological research on visual shape processing, but also for comparing the coordinate-axis view with prominent views in computer vision research (e.g., Medial Axes theory, image recognition based on neural network theory).