COVID-19 information and resources for KSAS
Skip to main content 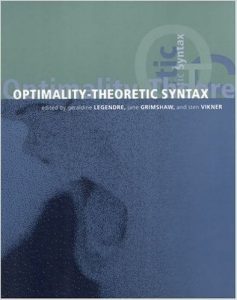 Recent work in theoretical syntax has revealed the strong explanatory power of the notions of economy, competition, and optimization. Building grammars entirely upon these elements, Optimality Theory syntax provides a theory of universal grammar with a formally precise and strongly restricted theory of universal typology: cross-linguistic variation arises exclusively from the conflict among universal principles.Beginning with a general introduction to Optimality Theory syntax, this volume provides a comprehensive overview of the state of the art, as represented by the work of the leading developers of the theory. The broad range of topics treated includes morphosyntax (case, inflection, voice, and cliticization), the syntax of reference (control, anaphora, and pronominalization), the gammar of clauses (complementizers and their absence), and grammatical and discourse effects in word order. Among the theoretical themes running throughout are the interplay between faithfulness and markedness, and various questions of typology and of
inventory.